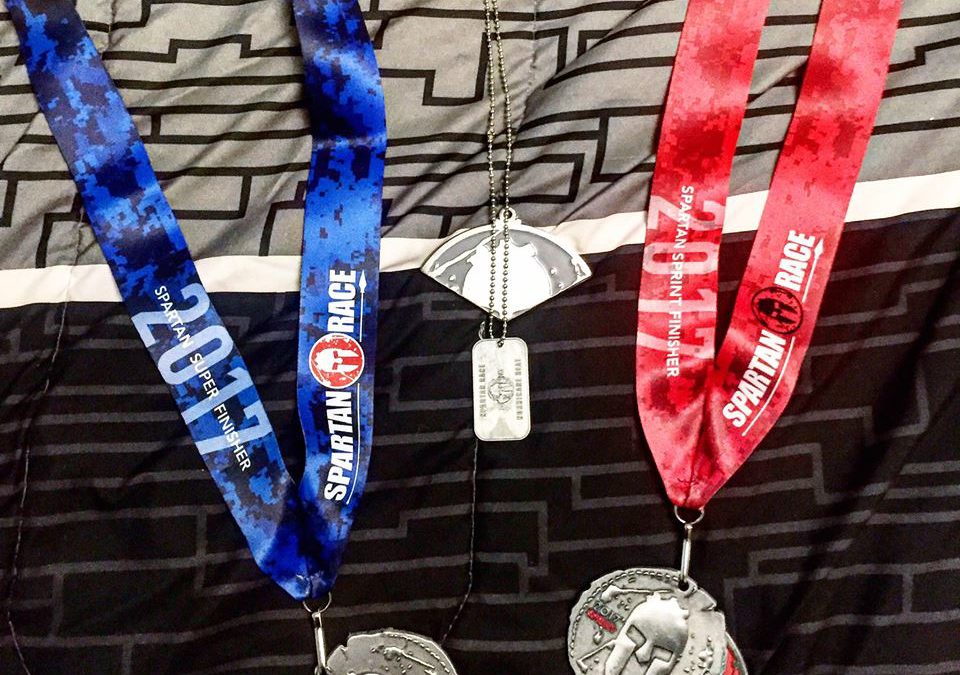 I finally nailed down my race weekend nutrition plan and I couldn’t be more pleased with the results! A couple of weeks ago I participated in the Toronto Spartan Super, followed by the 4-hour Hurricane Heat a few hours later and the Sprint the following morning. It was my first time running that many events within a weekend.

I have written about Food and Fluid Strategies for OCR and How to Fuel for OCR but I had never perfectly implemented a nutrition plan, until now. Even as an OCR Nutrition Coach, I have messed up my race day nutrition.

I spent the last few months really thinking about how to fuel for this race weekend and I am happy to share that plan with you.

Before the Super, I made it a priority to eat a lot more calories than I usually do before a race, with a major emphasis on carbs. AKA – actually trying to eat more than a tiny snack…

I had white rice because I find it much easier to digest than oatmeal or brown rice on a race day and it doesn’t leave me feeling heavy like oatmeal does. I had about half a cup of white rice, mixed with some almond butter, coconut oil and raw honey.

I mixed a scoop of Iron Vegan Sprouted Protein

in a cup of unsweetened almond milk to get in a little bit of protein since three races in 27 hours takes its toll on muscles. I also had a glass of orange juice.

Since I was eating about 2 hours before race time, I was aiming for a 1:1 ratio of grams of carbs to body weight in pounds. I was shy by about 21 grams of carbs. I had planned to eat an additional snack when I got to the venue, but quickly ran out of time.

During the Super, I carried my hydration pack with about 1.5 L of water and 2 Nuun

tabs. I also drank a cup of water at each of the aid stations. I consumed 2 chocolate truffle protein balls and 2 packets of Endurance Tap.

I was on course for 3 hours, so I should have been aiming for at least 90 g of carbs. I was aiming for food every 45 minutes, so my fourth feeding time would have been minutes before I crossed the finish line and I ended up skipping it.

I re-hydrated with 1 cup of orange juice mixed with water and ate two more of the chocolate truffle protein balls.

We went out to eat at the Food Forest in Peterborough (a raw vegan restaurant) and I ordered a veggie pesto sandwich and a mocha bean smoothie, minus the banana with added hemp protein. It was enough food to make me full, without getting a heavy feeling. Plus, there were a lot of hydrating vegetables.

I continued to drink water leading up to the Hurricane Heat.

I am not sure what the calorie and macronutrient breakdown was of the food I ordered.

After the Super I felt very energetic, which is not common for me after a race. My muscles were fatigued due to a total lack of training, but my body itself had tons more energy to keep going.

Again, I had my hydration pack on, filled with 2L of water and 2 Nuun tabs. Just before we started, I ate another protein ball.

During the 4-hour Hurricane Heat, I consumed 2 Endurance Tap packets and 1 Fruit 3 bar.

Once the Hurricane Heat was over, again I still had lots of energy, but my muscles were exhausted, especially my calves. On the drive back to the hotel, I snacked on an apple, beef jerky and Joseph’s Chocolate Nutless Clusters

. At the hotel, I had another half cup of the rice concoction and sliced turkey.

I planned to eat more, but it was getting quite late and I prioritized getting more sleep in before the Sprint the following morning.

Breakfast before the Sprint was very similar to that before the Super, minus the protein shake. I stuck to half a cup of the rice mixture and a glass of orange juice.

I carried a lot less water with me for the Sprint and only half of a Nuun tablet. During the race, I consumed 1 packet of Endurance Tap.

I was on course for 1 hour and 38 minutes. Again, I was aiming for nutrition every 45 minutes, so I skipped my second feeding as it was shortly before hitting the finish line.

I ate one of the Cliff Builders provided at the finish line after the race and then we went for lunch to Copper Branch in Brooklin (another vegan restaurant).

I was surprised to feel so energetic still, and I have the solid nutrition plan to thank for that. During previous races, I have been completely wiped out afterwards and even days later. I know part of that exhaustion was healing from Post Concussion Syndrome, but it was a very pleasant surprise to be able to work out the following day after 3 races in 27 hours.

Note: I am not vegan, but I find that minimal animal protein the night before a race and on race day works better for me.

I still want to work on increasing my pre-race calories and carbohydrate consumption for the DeadEnd Apocalypse on July 16.