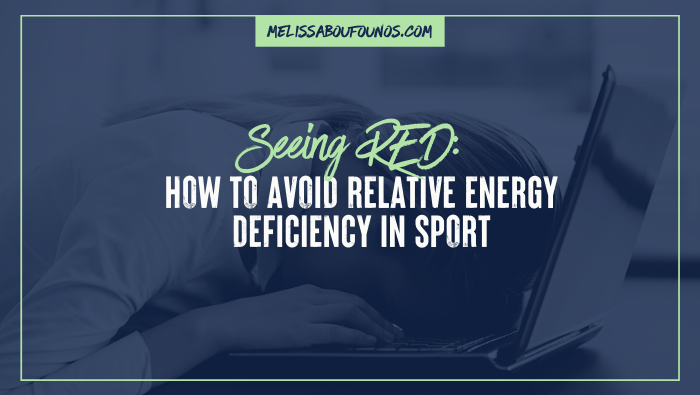 Have you heard of RED-S syndrome?

When it comes to obstacle course racing, RED-S isn’t referring to the shades of blush, rose and scarlet your face turns as you sweat it out and push your body hard to the finish line.

RED-S actually stands for Relative Energy Deficiency in Sports. The underlying problem of RED-S is an inadequacy of energy to support the range of body functions involved in optimal health and performance.

This condition was first described by the International Olympic Committee (IOC) in 2014 as “a syndrome that affects many aspects of physiological function, health, and athletic performance,” or in other words, “impairment that is caused by an athlete who is depriving themselves of nutrients while training,” according to a recent Medium article.

If an athlete isn’t consuming enough calories to cover their training output, they can become energy deficient, putting their whole body at risk.

That can range from declined bone health to a compromised immune system to organ system malfunctions and for females, unhealthy changes to menstruation cycles.

All of which can ultimately compromise their performance.

In recent years, several elite and professional female athletes have spoken out about suffering from RED-S.

The stigma that a leaner – or skinnier – athlete will be more successful in a race or competition just doesn’t seem to want to disappear from the sports world. It’s exhausting and discouraging that real change takes so long to implement, but finally, at least, female athletes are actually talking about their experiences.

One American female track and field star that recently spoke out in The New York Times is Mary Cain, who was breaking running records at just 17 years old and signed on to “the best track team in the world,” supposedly Nike’s Oregon Project.

“Then everything collapsed,” the Times story reads. “Her fall was just as spectacular as her rise.”

“After months of dieting and frustration, Cain found herself choosing between training with the best team in the world, or potentially developing osteoporosis or even infertility. She lost her period for three years and broke five bones,” the Times story describes.

And Cain is far from being the only female athlete to face this pressure to perform under extreme physical and emotional stress.

Also Nike-sponsored figure skater Gracie Gold “got caught in a system where she was compelled to become thinner and thinner,” Times said, and she developed an eating disorder that had her conjuring up thoughts of taking her own life.

It’s by no means a new story for female athletes who feel the need to be perfect – in how they look, in how they act in public and how they perform on their field of play.

But athletes like Cain and Gold have helped break the silence and raise not just awareness, but ring the alarm bells on RED-S, and its very real symptoms and physical consequences.

Although there hasn’t been a lot of in-depth, investigative research on RED-S as of yet, it is known that this condition can affect athletes of any age and gender.

Athletes more at risk of developing RED-S are those participating in judged sports focused more on “appearance and aesthetics” such as gymnastics and figure skating, according to Very Well Mind, as well as weight category sports and, of course, endurance sports such as running.

So be aware of the warning signs. Those include frequent injuries or poor injury recovery, such as stress fractures that are a sign of inadequate nutrients, as Medium points out.

Feeling fatigued or under-fuelled going into or while training is also a sign that something is off. Improper nutrition strategies while training certainly won’t help your recovery between workout sessions.

And for female athletes, it’s vitally important to keep an eye on your menstrual cycle. The absence of menstruation (amenorrhea) or infrequent menstruation (oligomenorrhea) are commonly associated with low levels of body fat, low energy intake, and high physical activity. This can lead to early osteoporosis and bone fractures.

While disordered eating underpins a large proportion of cases, you can still end up with low energy availability if you follow a mismanaged program to quickly reduce body fat, or if you don’t match your energy intake (food) to your high energy expenditure from training.

If you believe you are suffering from RED-S, please seek medical help from a sports nutritionist, dietician, obstetrician, gynecologist and other appropriate medical professionals immediately.

There are treatment options, such as dietary intake increase, exercise reduction, as well as proper nutrition and rest. Recovery from RED-S is possible.

But remember, no race is worth sacrificing your physical and mental health.